Fans of comic books often look for differences between dc and marvel when comparing the two studios. The competition between these entities is getting stronger every year. So, who produces the best comics? Whose characters are more loved by the audience? Whose stories are more captivating and breathtaking?

Is there a true leader in the world of superheroes? The truth is complicated, as always. In this article, we will conduct a careful dc vs marvel comparison. But the final decision will be yours. 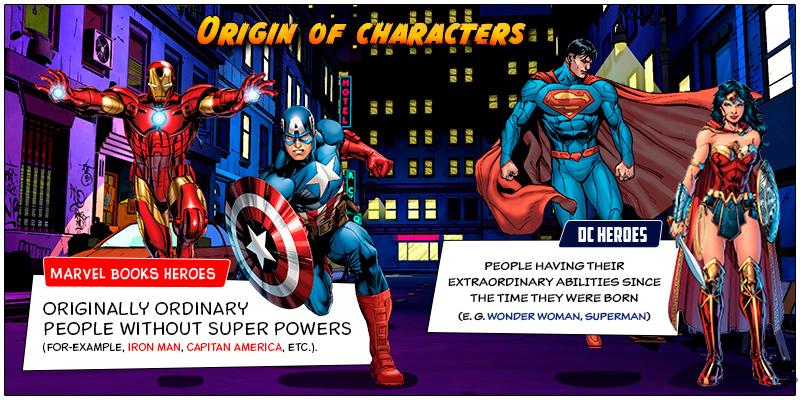 Most Marvel heroes are originally ordinary people without supernatural powers, who gained them under specific conditions (For-example, Iron Man, Capitan America, etc.). At the same time, DC heroes can boast of having extraordinary abilities since the time they were born (e.g. Wonder Woman, Superman). 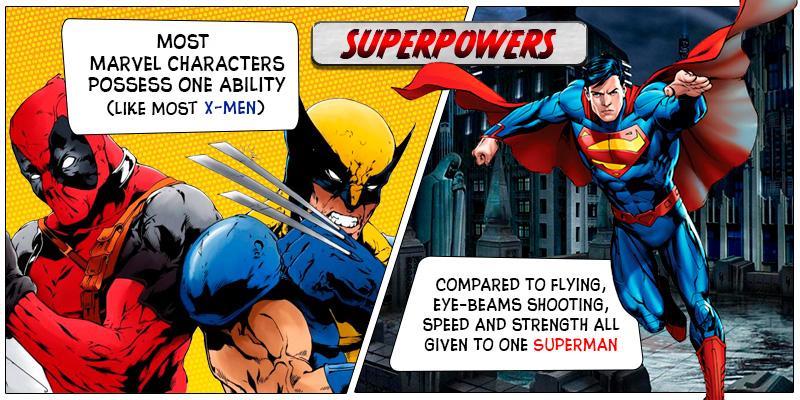 If to compare the superpowers of heroes in DC comics vs Marvel comics, one can notice that the creators of Marvel books were not so generous in enduing their characters with force compared to DC writers.

Most Marvel characters possess one ability (like most X-men), compared to flying, eye-beams shooting, speed and strength all given to one Superman.

One more difference between Marvel and DC characters is that the latter were created much earlier in the 1930s and 40s. This is the reason why some of the Marvel characters have names, which echo the names of DC heroes.

Moreover, this is also the reason why most DC comic books used to talk about a single hero without putting him in a team. They had to present a hero to the world before making him a part of some superhero alliance.

Except for such characters as Dr. Strange, Mephisto, and a couple of others, Marvel heroes do not often face magic in their fight against evil. On the other hand, we have DC comics where the members of the Justice League fight something mystical and magical. So, if you are a fan of magic and mythology, you are going to like DC stories more.

#5. Fantasy, sci-fi, mystery in DC vs science fiction in Marvel 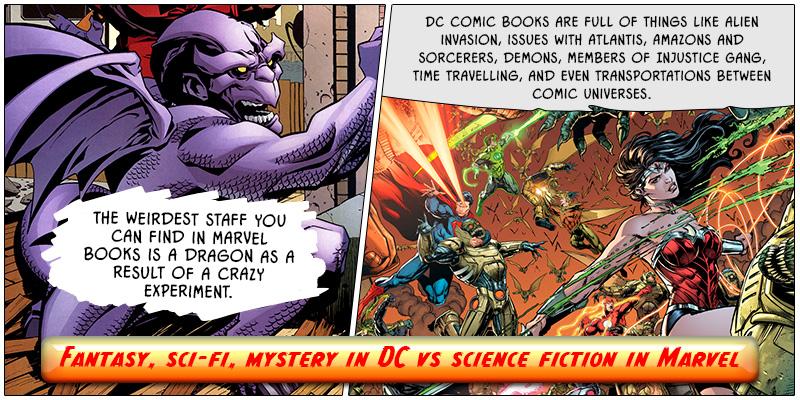 If you still wonder: Marvel or DC which is better? Just think about what you like most: science fiction stories with an interesting, however, a bit grounded plot or stories full of out-there things?

If we forget for a second that comics are based on made-up events, heroes and villains, the weirdest staff you can find in Marvel books is a dragon as a result of a crazy experiment. At the same time, DC comic books are full of things like alien invasion, issues with Atlantis, Amazons and sorcerers, demons, members of Injustice Gang, time travellers, and even transportations between comic universes.

#6. The quality of movies

Speaking about and comparing DC vs Marvel comic, many fans stress the link between the movies and graphic novels. It is not a secret that Marvel movies are more popular among comic fans due to the fact that the moviemakers managed to create memorable, interesting, and bright characters who are liked by the public. A bit of heroism, a bit of seriousness, few drops of humor and we have what we call a good movie. In contrast, the films of DC studio can be characterized as too serious and sometimes even too noir (Watchmen). It can be suggested that the viewers are not always ready for something too deep and too philosophical in relation to comics. Maybe this is the reason why DC films have an average rating of 47% on Rotten Tomatoes. 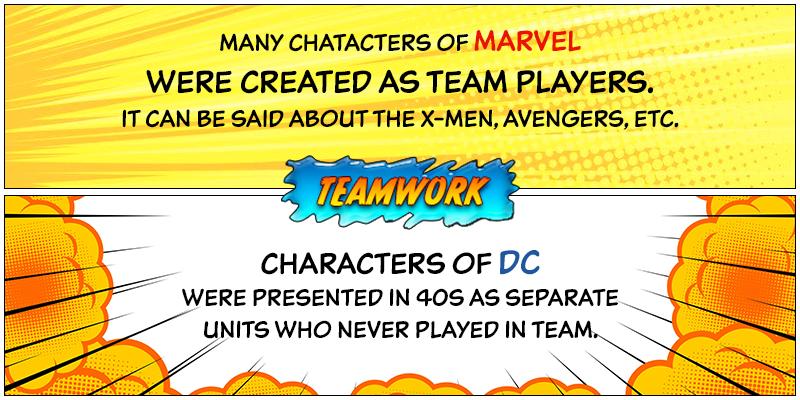 The other difference between DC comics vs Marvel comics characters is that the latter were created as team players. It can be said about the X-men, Avengers, etc. At the same time, DC personages were presented in the 40s as separate units who never played in a team. Many people can say that making teams is not always a good choice as less attention is paid to each particular character. Their responsibilities in a crew have to be divided between all its members. Let’s say that one is a scientist, the other one is a technician, etc. However, heroes like Batman can do all the staff on their own, which helps concentrate attention on one character and present him or her in more detail. Nevertheless, creating teams in their fight against enemies is common to both studios (For example, Marvel’s Avengers and DC’s Justice League).

#8. Powers of Marvel characters are easier to explain

We have already mentioned that Marvel characters have fewer powers, which are easier to explain compared to DC heroes. For example, Cyclopes shoots beams of energy out of his eyes, while Superman can fly, turn back time, has eye-rays; he is fast, superstring, etc. Iron Man is a genius inventor and scientist, who has developed his robot suit, while Batman is a scientist, ninja, detective, fast driver, technician among others. 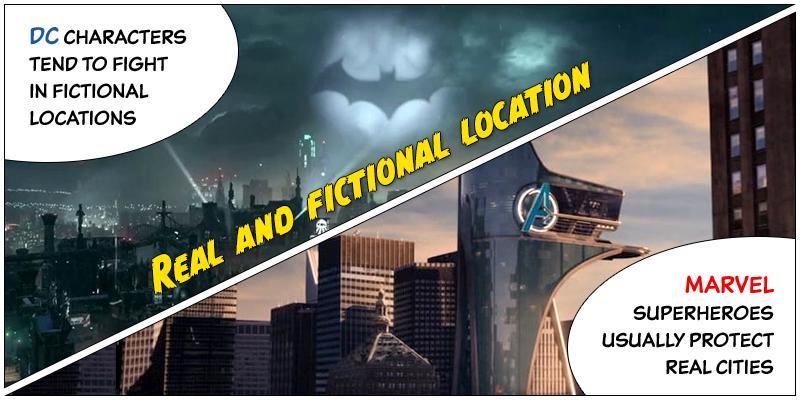 Every hero has their own city to protect. However, while Marvel superheroes usually protect real cities, DC characters tend to fight in fictional locations. Nevertheless, regardless of the fact that Gotham City cannot be found on any map in this world, it is not difficult to suggest that it is a prototype of a modern New York. This parallel is drawn considering that both studios are located in NY, which is sometimes too obvious.

Opposition Marvel vs DC comics is visible not only in books but also within the facilities of both studios. They differ not only in terms of heroes and their superpowers but also in terms of the productivity of both teams. For comparison, DC issues 4 to 8 series per month, while Marvel creates up to 15!

This comparison can be continued as there is still much to be discussed. Who has the most professional animators: the DC studio with the best artists from Warner Bros. or the Marvel company with Disney animators? Whose stories try to resolve philosophical questions? Who touches on the political problems present in modern society? Who is the master of story-telling? Whose comic books have more variations in terms of hero personalities and types? One can also compare the audiences of each company; the number of awards received by each of the two competitors.

Still, the few things we know for sure: the difference between marvel and dc is not always present. Together, they have transformed their superheroes into contemporary myths. Exactly the same can be said about their antiheroes. The villains are recognizable and known even to those who are far from the comic genre.

So, what’s the difference between dc and marvel? The answer to this question differs from person to person. But let us not limit ourselves because of loyalty to a certain company. Let’s open ourselves to new and sometimes opposing views.

How Do Manga and American Comics Differ? Comic Book Script Format Writing Tips How to Make a Webcomic? A Professional Workshop 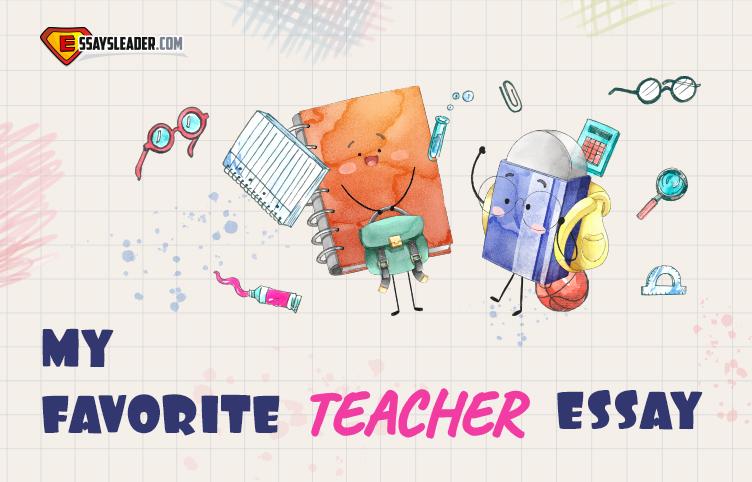