We have created the list of incredible argumentative essay topics for both instructors and students. Our website can be a reliable resource, where you can draw inspiration from, if you do not know how to approach persuasive writing. The list consists of numerous sections and it is simple to find the needed topic. You will definitely come across good argument essay topics for your personal pieces of writing.

If you do not know how to start writing and deal with argumentative topics, you can always consult some online writing labs or find examples that will clearly show what argumentative writing presumes.

Do people pay enough time and attention to the protection of animals?

Have you ever kicked an animal? Why? Do you regret?

Should there be a severe punishment for people who treat animals in a cruel manner?

Should zoos be closed? Are there any ethical and legal considerations about it?

Why did dinosaurs become extinct?

Should animals be given certain legal rights, just like human beings?

Do you think that people have no right to kill animals for food?

What are the common forms of cyber-bullying?

Bullying at schools. Should teachers punish students for this sort of misbehavior?

How to differentiate between bullying and typical quarrels between students?

Should students report on bullying to the police?

How can school counseling deal with bullying?

Do you clearly differentiate between fiction and non-fiction? What is the edge between those two literary genres?

Can people live without art and what possible consequences will be?

Do you believe that graffiti can be characterized as an art form?

Does pop culture make any positive influence on people?

Should all students be obliged to study Arts in colleges or universities?

Good argumentative essay topics can always be found on our website. You are bound to find the one that interests you the most.

Should potential employers pay attention to the SAT results?

Would you quit your well-paid job for a low-paid one that you dreamt about for so long?

Would you like to commute to your work instead of living in a loud city?

Do you think working at home is as productive as working in the office?

Will you add your employer to a friend list on the social media websites?

If your life values differ much from the ones of your employer, will you still continue working for the same company?

Compare and contrast lives of the immigrants and Americans?

Do you think that neighborhood imposes its own rules about how you should live in America?

Is it possible to work days and nights and become rich?

While choosing a country to live in, does it matter that the US is the most powerful and influential in the modern world?

Should young children have a cell phone?

Do you think parents should buy luxurious gifts for their children?

Should children feel a certain level of freedom in their actions?

Pushing parents: Will children ever reach anything according to parents’ wishes?

Should parents set certain “technology hours” for their kids?

Does modern pop culture make a strong influence on children and their perception of the world around them?

Should parents forbid children to dress like their favorite celebrities?

The influence of excessive video watching on children and their development of personality.

Do you think that Halloween costumes should be changed into positive ones?

Should parents spy on their children by checking their social media accounts?

How to control teenagers’ behavior?

Modern parent-children relations. How are they different from the past?

What upbringing techniques do you believe to be the most effective?

The Rich and Fame

Do you think that children of celebrities would never survive without money given by their parents?

Should paparazzi be legally punished for spying on celebrities?

Do you think celebrities should donate more to volunteer organizations?

Do you think famous people are happy?

Scholarship and grants. Are all applicants equal?

How to choose the right college.

How to write an application essay for college of your dream.

Should all college students live in dorms?

Should English literature and history be an obligatory course for all college students?

College rankings: How do instructors divide students according to their personal preferences?

How would you improve the admission process?

Do students need to attend all classes?

Late submission. Should instructors re-consider their policies about extending deadlines?

Should college education be free of charge?

Tests on animals. Do you support or oppose it?

Have you ever tried to do something useful for the environment?

Should all people be involved in the community programs related to environmental issues?

Do you think climate changes can be overcome?

How do you see the world around us in 50 years?

Do you think that developed countries invest too much in the development of science?

There are many topics for argumentative essay. If the choice is up to you, do not make any quick decisions and read our list till the end to make the right move.

Why do people resort to a cosmetic surgery?

What is your opinion about “high quality clothing?” Should it always be expensive?

How should office workers dress up?

Should children be given much freedom about the way they choose clothing?

Do you think that all people should have a hearty breakfast? Why?

Do you really care about the origin of your food?

Should MacDonald’s and Tacos be forbidden?

What is your ethical position pertaining to meat consumption?

Should school children be forbidden to buy sugary drinks?

What is your perfect meal? Should it include vegetables and fruits?

Should parents pay more attention to the nutrition of their children?

Do you think overweight is interdependent with the food he/she consumes? 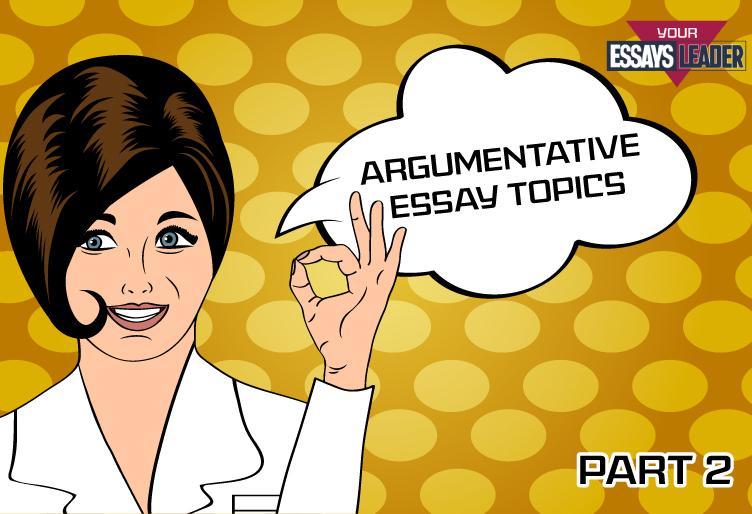 Should students playing football be paid?

Do you consider football to be a dangerous game?

Do you think children be allowed to play football despite its high trauma levels?

Do you think football fans act too offensively?

Do you think a reunion of Rihanna and Chris Brown is a good choice?

Do you share an opinion of inequality of male and female leadership?

Should school divide classes for boys and girls?

Do you think gender influences decisions of potential employers?

Do you think that parents set different standards for their children depending on their gender?

Do you think that gender has no influence over people’s decisions?

How do you perceive the issue of sexual violence in the US?

Is it true or false that women rely too much on their emotions in decision making?

Is it alright for males to comment on females they see on the street or elsewhere?

Do you think it is easier to find a compromise with a person of the same gender?

Do you think that women are too much concerned about a “perfect body”?

Why do boys choose exact sciences more often than girls?

Should girls be forbidden to wear skirts at school?

Do you think that gender issues are not well-researched?

How do modern media define sexuality?

Do you think that men and women have equal rights and responsibilities?

Can you create a plan for discouraging teens from smoking?

Do you see it obligatory to impose drug testing on students?

Do you think that an inclination of drunk driving should be finally resolved?

Should marijuana be legalized in all states?

What is binge drinking? Does this problem refer to the US youth?

Should parents refrain from drinking at home in front of their children?

Do you think that government should invest more money into anti-smoking campaign?

Do you think that racial inequality can ever be eradicated?

Do you think that modern generation develops too rapidly?

What is your perfect view of a generation?

Do you think that government should pay more attention to the national security?

Do you think that politicians are not preoccupied with citizen privacy?

How you imagine a perfect government?

Does government deal mostly with problems of the rich?

Would you like to be a state governor? What will be your first steps?

Do you think that guns should be allowed for common people?

What is the positive side of gun usage (if any)?

Do you think homicide rates can become lower if government imposes a ban on gun possession?

Do you think that students will feel safer if school security will carry guns?

Mass shooting and gun laws. How should government react to the issue with gun possession?

How can the issue with illegal gun ownership be resolved?

Should euthanasia be permitted?

Do you think medical marijuana should be legalized in all countries?

Should unvaccinated students attend the same classes with vaccinated ones?

Do you think that overweight people need more psychological assistance than anyone else?

Do you believe that healthy food consumption is a key to the general well-being?

Should parents control what their children eat outside home surrounding?

Do you think that school tests can precisely evaluate one’s knowledge in the subject?

Should standardized tests be cancelled?

Do you think that students should spend more time on preparing for tests?

How do you manage to suppress anxiety before tests?

Do you think that parents should teach children to be tidy, no matter what people surround them?

Should all children be involved in house cleaning?

Do you think that a clean house reflects how successful a person is?

Explore even more topics for an argumentative essay with us. You will find a great deal of topics that can be very interesting to explore in academic writing.

Do you think that a good leader should be an extrovert?

Do you think that leadership is an inborn feature?

Do you think that politics is nothing more than a game with our lives?

Tablet devices: Should they be introduced in a school setting?

Do you think that students spend too much money on technological devices?

Do technology trends influence all groups of people?

Do you think that technology makes our life easier?

Can you remember instances when you would rather get rid of all technological devices?

Do you think that texting at school should be controlled?

Does technology make our life funnier?

Should the usage of cell phones be restricted at schools?

Do you think that robots will actually live with us?

Do you think that a computer will be able to assess your essays?

Should illegal immigrants have the same rights to education as common citizens?

Should the US introduce less strict deportation laws?

Should government spend less money on identification of potential terrorists? Do you think that it is a waste of money?

Have you every though that there is a spy behind you?

Do you think that military force operations in developing countries should be cancelled?