Today, the buying behavior is among the key topics studied by academic researchers and practitioners all over the world. In 2017, the Nobel Prize in economics was awarded to Richard Thaler for his contribution to the research of human purchase behavior. Automobiles has become the industrial necessity nowadays; therefore, it is useful and beneficial to investigate and understand how people make a decision to buy certain car and to determine which factors influence their choice. The culture and nationality significantly impact the car buying behavior; hence, American and Chinese citizens exhibit divergent automobile buying traditions. However, the ways in which representatives of these cultures decide on a new purchase have numerous similarities and differences predetermined by economic, political, social and cultural development of the country.

In China and in the United States, the car is the inseparable part and commodity of everyday life. Still, for each particular person it has its own meaning (for some people, it is a status, for others it is the means of transportation). Nevertheless, time passes and trends change showing that both in the United States and in China, the role of automobiles is transforming. For example, in the recent decades the purchasing behavior of American customers has considerably altered, as the Millennials (Generation Y) do not regard a car as a representation of status. They use it more as a commodity and prefer other modes of transportation, if it is possible. The following figures also prove this statement demonstrating the transformation in the psych of the average American automobile purchaser (see Figure 1 and Figure 2).

Figure 1. Personal Car as a Preferred Mode of Transportation

Figure 2. Amount of People Ready to Give-up Driving even if the Cost of Alternative Means of Transportation is Higher

Hence, the given statistics is thought-provoking and important, as it shows that Generation Y has adopted the new vision and approach to cars and their role in the everyday life. According to Pershad, connectivity, affordability and safety are the key factors that influence the purchases of vehicles by Millennials in the country. At the same time, the older generation did not change its attitude and continue buying cars for the same reasons and purposes.

The report compiled by Gao, Sha, Zipser and Baan concerning the automobile car market in China demonstrated similar results based on the interviews of nearly 3500 consumers across the country. Thus, the report has presented the following statistical information about the automobile industry in China. 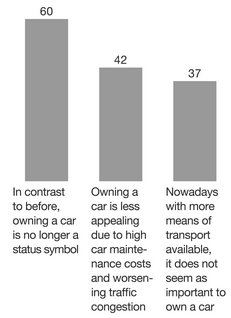 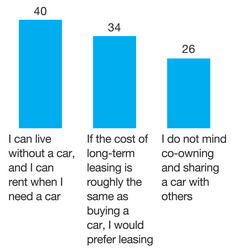 Thus, according to the research of Gao, Sha, Zipser and Baan, nearly 37% percent of the surveyed consumers stated that today car ownership is not as important as in the past, since numerous other means of transport are available. In particular, approximately 40% of customers claimed that their needs could be met by renting, 34% resorted to leasing, and 26% preferred co-owning. With respect to the premium segment of Chinese buyers, it is necessary to state that they do shopping with new priorities, which are quite different from the previous ones. Besides, five years ago the survey of Chinese premium-car consumers conducted by Gao, Sha, Zipser and Baan demonstrated that the budget was the fourth most important factor in buying the car, while at the present time, it is the second (after brand) for both used and new vehicles of premium segment. The following figure displays that the attitude towards used cars in the society is changing for the more positive one (see Figure 5). 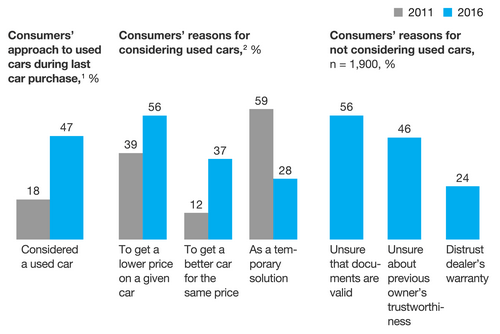 Overall, the above-mentioned statistics proves that Chinese purchasers of cars are becoming less status conscious and more practical than ever in the national history.

In regards to discrepancies in automobile buying behavior between the United States and China, it is important to state that the United States has a psychologically different vision of the car. Due to suburban sprawl as well as other economic reasons, the American way of life cannot be imagined without an automobile. Of course, similar trends are evident in China, but not to the same extent. The major difference is that the American residents may buy a motor vehicle and from time to time use the car sharing services (people combine them for numerous purposes), while the Chinese customers mainly resort to either one option or another.

For the fieldwork section of the present research, ten Chinese and ten American individuals (mostly students) were interviewed in order to compare their car purchasing behaviors and to discover which preferences as to cars they have (in terms of brands, technical and visual characteristics, general attitude towards Chinese vehicles compared to the U.S. automobiles and vice versa). In particular, the following questions were asked: What are the key determining aesthetical and functional factors when you buy a car? Do you prefer buying (used or new), leasing, renting a car, or using the alternative means of transportation? Why do you need a car? The obtained results were thought-provoking. Nearly 90% of the interviewed people (both Chinese and American) stated that they bought either a new or a used car, as it was an absolute industrial necessity without which they could not imagine their personal and professional life. Only 10% claimed that they were ready to use the public transport or alternative ways of transportation since their lifestyle did not require ownership of the vehicle. At the same time, the majority of interviewed individuals owned used cars due to financial reasons. The key defining factor for the Chinese and American students was price and brand; however, the elderly (both Chinese and Americans) asserted that comfort and size were the main determinants for them (especially for those who had family and kids). None of the people possessed the Chinese car. Most subjects of the survey needed the automobile to commute to university, work, as well as other public places. The results of the interviews of American and Chinese students were very similar, despite different cultural and social origins. Hence, this fact demonstrates the influence of the globalization and adaptation forces. On the one hand, because of urbanization, quick pace of life, along with other economic and social factors, the role of a car all over the world is becoming more essential. On the other hand, people tend to adapt to the social environment they live in, even by changing their previous opinions and views. Thus, it is important to differentiate the buying behavior of the Chinese living in China and the Chinese residing in the United States. The fieldwork of the given research did not confirm the theoretical information presented in this study (according to the theory, youngsters pay less attention to buying or using cars and resort to the alternative means of transportation; however, in reality the majority of the interviewed people considered the automobile an inseparable and valuable part of their life).

To conclude, it is important to state that due to the processes of globalization, integration and urbanization, the cultural limits between the countries are slowly disappearing. Therefore, such geographically and economically different countries as China and the United States have many common characteristics in terms of automobile buying behavior. At the same time, the economic, political and social factors as well as traditions and values defined by culture still play a crucial role forcing the carmakers to produce different cars for different countries (in this particular case, China and the United States). Understanding this kind of behavior allows the automobile manufacturers to improve their sales and to satisfy the increasing needs of their customers both in the short-term and long-term perspectives.