Introduction to the Country

Commonwealth of Australia is one of the largest world economies generating gross domestic product of USD 1,482.5 billion in 2014 according to the estimates of International Monetary Fund. The country has capital in Canberra and population of 23.6 million people. It enjoys relatively low unemployment rate combined with modest level of inflation. The main economic sectors producing highest portion of value added are banking and financial services, real estate industry, construction projects, health and social services, trade (both retail and wholesale), education, insurance, and public administration and defence. On overall, Australia has one of the most favourable business environments with strong government role, low corruption level, strong rule of law and high political stability.
The most important factors influencing transportation and trade in Australia are its territory and geographical features. The country has sixth largest territory in the world covering about 7.7 million square kilometres. It is divided into two territories and six states. The country is very rich at raw materials and has one of the best climates in the world. Besides, it is geographically unique country totally surrounded by sea and having no land boards with other nations. Consequently, all its international trade is conducted by sea and air while huge territory requires considerable development of road and rail transportation for the domestic freight.

Source: International Monetary Fund (n.a.).
Traditionally, the main trading partners of Australia were Europe and the USA. Recently, notable impact on the international trade was made by signed free trade agreements. Thus, volumes of export and import operations have increased dramatically after signing such agreements with Japan, China and Republic of Korea. They opened markets exciding 1.5 billion people for Australian companies and also critically increased demand for logistics and transportation services.
Today, the most important trading partners of Australia are China, Japan, Republic of Korea, the USA, Germany, New Zealand, Singapore, the United Kingdom, Thailand and Malaysia. Thus, total trade volume with China in 2013 constituted 150,919 Australian dollars (AUD), while trade volume with Japan was AUD 70,753 and that with the USA constituted AUD 54,714. Being reach in iron, coal and natural gas resources, Australia has one of the leading places in their exports (see Table 2). Simultaneously, it heavily imports personal travel services, petroleum, motor vehicles, medicaments and freight services.

Transport and logistics play extremely significant role in the growth of gross domestic product and economic development of Australia. It is estimated that the industry contributed as much as AUD 131.6 billion into the country’s economy in 2013. There are four major transportation ways in the country: air cargo, coastal shipping, roads and railways. The latter is currently the most important transport mode and it is expected to develop to the highest extend in future (see Figure 1). Notable impact on the increase of rail and road transportation modes was provided by introduction and wide implementation of unified size containers suitable both for trucks and trains. Also, air freight is expected to increase in the nearest decades due to introduction of electronic systems and enhancing overseas trade. 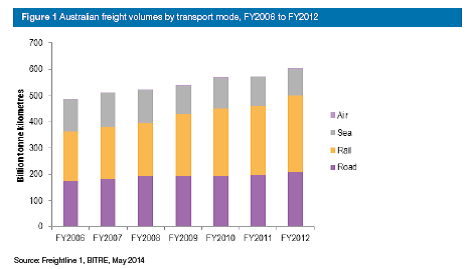 Today, statistics on international trade and logistics industry is divided in two major directions: containerized and non-containerized trade. While the first one has relatively equal proportions in exports and imports, non-containerized trade is strictly export-oriented by bulk trading in iron ore, coal and natural gas. Bureau of Infrastructure, Transport and Regional Economics (2014) predicts that over the next 20 years containerized trade and related transport infrastructure will experience continuous growth at the level of 5.1 % per annum. The most increase is projected in largest container ports of the country such as Sydney, Melbourne, Brisbane, Adelaide and Fremantle. At the same time, non-containerized trade will grow at more modest rate of 3.0 % a year and hopefully becomes more proportionate in export-import relation.
Due to geographical specifics of the country, Australian international trade is mainly conducted by sea and air. Currently, there are six major sea ports dominating the international trade volumes in Australia. Three of them are specializing on iron ore freight: Dampier, Port Hedland and Cape Lambert. The other three are used mainly for trading coal: Hay Point, Newcastle and Gladstone. It is assessed that over the past decade overall trade in Australian major ports has increased by 75 % in tonnage mainly due to the mining exports. At the same time, this industry led to development of other ports such as Brisbane and Abbot Point.
Also, increase in the capacity of ports and volume of international trade was critically impacted by the development of local infrastructure and transportation services. All of the ports are closely interrelated with rail and road transport modals.  Growth in the volume of international trade led to the enhanced significance of logistics and co-ordination. This process was highly facilitated by introduction of unified containers allowing companies to transport various goods by combined modes. Respectively, containers freight made rail and road transport modes rather complementary services instead of competitors as they previously were.
Today, rail is the dominating transportation mode for bulk trade. That is the trade in large quantities involving homogenous products such as liquids (e.g., oil) and crushed solids (e.g., coal and grain). Most of the bulk trade is using rail freight for transporting between major cities and to the main sea ports. Rail was also dominating non-bulk trade (that is in smaller volumes and mostly containerised). However, over the past decade roads won the leading position in containerised and other non-bulk trade. Most of this trade is domestic and inter capitals as urban areas are most demanding and best prepared for road transportation.
Due to favourable climate for investments and doing business in Australia, road transportation is presented mostly by thousands of small operators owning two or more trucks. They provide highly competitive environment and market prices for their services. However, the level of service might differ considerably for various transporting companies. On the opposite, rail transportation is maintained by three large operators: Queensland Rail, Pacific National and SCT Logistics. The latter also conducts intermodal transportation owning a line of trucks and rails. Sea and air freight modes are very competitive and involve high proportion of international operators. Consequently, Australian companies have to comply with international market prices and expected level of service.

Development of transport infrastructure is of critical importance for further increase in the trade volumes. Growth in the industry outcomes is closely related to economic situation in the country and cost of the provided service. Both private and public transport companies invest heavily in constructing new roads and routes. Figure 2 represents volumes of investments in transport infrastructure till the year 2008. Today, Australian government reports even highest investment figures in all transportation modes. 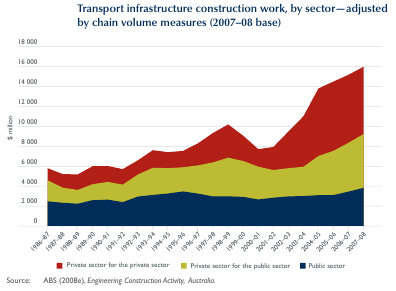 On overall, Australia has rather developed transport infrastructure. Its domestic trade is mostly using roads for urban and containerised transfers and rails for bulk freight. At the same time, both these modes are implemented for inter country transporting of imported and exported goods. However, due to geographical uniqueness of Australia, cross board transportation is only possibly by sea and air. So, shipping is the most important transportation mode in international trade of the country.
Development of the international trade in Australia has demonstrated considerable results since 2000. Although the country has negative trade balance every year, it remains stable in proportion to its gross domestic product but growth significantly in nominal figures. Most of the trade is related to raw materials such as coal, iron ore, oil, grain, etc. and is conducted by rail across the country and by sea in the international transactions. Trade in finished goods is exploiting road mode and air transportation services.
Further development of international trade and transport infrastructure are closely interrelated. Demand for transportation service will generally increase the amount of profit generated in the industry and is directly dependent on the volumes of inter country and overseas trade. Besides, transportation sector is strictly influenced by costs for providing services such as fuel prices, legal restrictions, international competition and requirements for new technologies and modernized level of the provided package.