Essay
The Art of Paul Rand

Paul Rand is still regarded as among the most renowned graphic designers globally, despite having died about 10 years ago. Up to date, he is most popularly known for the corporate logo designs that he made. He held a firm belief that a logo can only bring out a real meaning if it is associated with the business, corporation, product, or service. In his view, if a logo is not outstanding, the company and its products would as well be perceived as such. He also opined that a logo can only perform its work after the audience has been appropriately conditioned, a function that is again performed by the logo itself. Driven by this belief, Paul Rand went ahead and designed logos for some of the global leaders in business. As will be seen in this essay, Paul Rand is credited for having pioneered an era in which business is led by design.

One of the greatest contributions of Paul Rand to the history of design practice is that he pioneered the incorporation of design into business. He did this by successfully convincing businesses to place design first and everything else would follow; something that he did almost single-handedly. Paul Rands practice peaked in the 1940s, 1950s, and 1960s, and it is during this time that he put so much effort in making the profession of design reputable. Guided by his work and sentiments, many individuals transitioned from just being commercial artists to becoming graphic designers. Even before he was contracted to design a logo for a business, he would make effort to appeal to the business owner on the potential that design had in revolutionizing his business.

The fact that Paul Rand valued design in business would be seen right from the way he approached potential clients. He would begin by designing an outstanding presentation booklet that detailed how his designs could assist the client in meeting his or her business needs. The booklets by themselves were art works that ushered the client into the beautiful world of design. Notably, they would present a logo design as a form of rational, logical decision and lay out the ideas behind the designs in a language that was simple and persuasive, reinforced by images. It is Rands patience to put down what he thought were the possibilities of design that saw him woo the interests of CEOs of such big companies as Morningstar. He enabled them to comprehend the invaluable position occupied by the aesthetic aspects of corporate communications and products.

The advertising design work that Rand performed in the 1940s successfully revolutionized the manner in which the concept of branding was approached by businesses. He recognized that the ad was ultimately meant to sell a product to potential consumers and it could only achieve this if it was designed in a manner that visually conveyed the message. Accordingly, he held that once consumers look at an advert, they should get an aesthetic experience from it, and subsequently, the business would do better. These are the ideas that drove him to lead corporate communications of such companies as IBM and ABC.

Rand also facilitated the entry of design into business by helping art directors gain more influence in major corporations. Prior to his practice, the copy writer was highly regarded whereas art directors would be dismissed as insignificant. The work of the designer was to illustrate an ad that had been written by a copy writer, and this portrayed designers as doing a largely passive job. However, Rand introduced a concept in which he, as a designer, would fuse utility and beauty and proceed to merge the image with the text. A good example of an instance in which he saw this approach applied was when he designed 1960s ad campaign for Volkswagen. He managed to convince the company that the art director should lead the fusion and not the copywriter. In a different context, he employed a creative approach to typography to come up with an ad design that featured a pioneer in the aviation industry by the name Jacqueline Cochran. The ad had words dancing around the models legs. Up to date, this approach in which the text and image fuse to bring out a strong advertising message is still employed by many companies.
Picture 1: A 1943 ad designed by Paul Rand 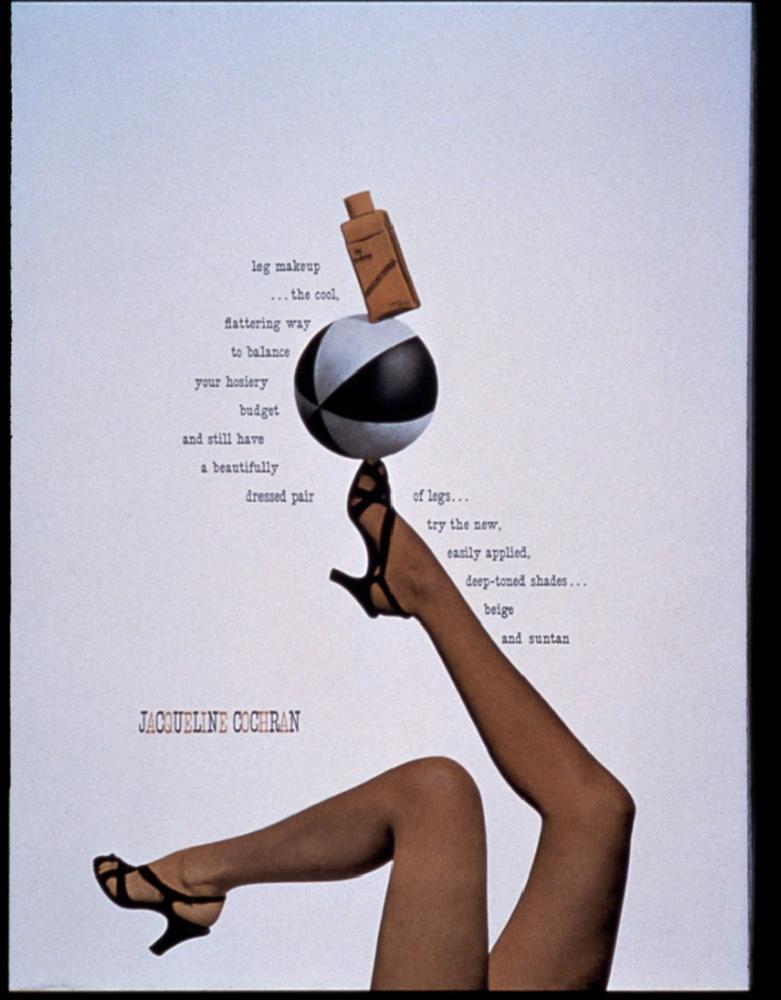 Rands outstanding performance in bringing business and design together could be seen in the way major companies endorsed his work. After he successfully led IBMs corporate communications in the 1950s, other businesses got inspired to put design first. In 1956, Thomas Watson took over the management of IBM and noted that the companys corporate design was poorly handled. Across various platforms, the aesthetic was inconsistent with an example being that branches found in different regions used varying stationery. However, when he visited a showroom that harbored Paul Rands work, he readily hired him to design the companys new graphics and logos. At the time, the strategy of employing visually cohesive communication in all brands platforms was gaining momentum. Rand facilitated the development of the strategy up to a point in which it became one of the key strategies employed by businesses. Motivated by Rands outstanding work, Steve Jobs hired Paul Rand in the 1980s to design for his educational computer company, NeXT. In NeXT as well, Rand brought the strategy of achieving design cohesiveness and simplification across all brand platforms including in the product itself, its advertisement, and in the stores in which it was sold. Today, the approach is seen in many companies including global leaders in various industries.

To further emphasize the position of design in business, Rand would be keen not to entirely revamp the old logo while designing corporate logos of existing businesses. Rather, he would design what appeared like a modernized version. This is one of the strategies that Rand used as he approached his clients, as he would not propose a design that was too radical. This is because he recognized that customers related to a certain aspect of the old logo and it was thus a major risk to lose it entirely. Using this approach, Rand designed IBMs logo and other companies such as ABC and Cummins followed suit in hiring his services.

In conclusion, Paul Rand spearheaded the integration of the design practice into business, by convincing business owners of the power of design in selling the product or company. He was convinced that design could change the way consumers looked at a company and its products, and even convince them to buy them. He changed the perception held towards designers in corporations by propelling the work of a designer into the hallmark of a companys selling strategy. One of the companies in which his work transformed business was IBM, after which other companies hired him to design for them. Today, some of the advertising design approaches that Rand pioneered are used by other designers, whereas some companies that he worked for have held on his design work. This being the case, it would right to argue that Paul Rand contributed to the history of design practice by moving the practice from being just an art to being an integral component of businesses.