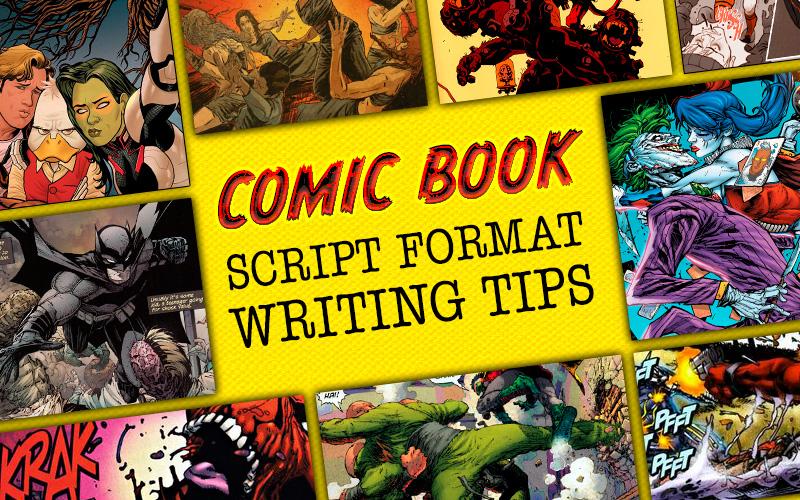 The last decade of the past century was marked by the introduction of new forms of entertainment. Thus, online games and social platforms that allow users to upload videos began to replace fine-literature books, newspapers, and comic books.

No doubt, this tendency has negatively affected the comic books industry, as now these publications are freely available online. Thus, people do not want to waste their time on a trip to the bookstore and spend their money on something that can be found on the web free of charge. Still, many people try to master the art of comic book writing. They surf the Internet for hours looking for comic book script format writing tips. What makes them do so? The reason number one is their own desire to escape from the dull and grey reality plunging into the world of heroes and adventures. These are the escapists who prefer this way of spending free time to all other forms of entertainment.

If you want to know how to format a comic book script or learn how to write a comic book, our article should be the number one stop for you!

Expert Advice on How to Write a Comic Script

Often, young writers do not know how to start writing their first comic script. The strategy below will guide you through all the stages of script writing.

Before writing your book, you should answer some questions:

Every story, whether it is a novel or just a comics, is based on some event and some characters. People, creatures, etc. you describe in your script will form the core of your story. That is why it is extremely important to pay particular attention to them. Remember that the readers will not necessarily remember the plot of your book or some background details. The only thing they may memorize is your character. Do you know what the first book in the series of comics about Batman is about? Probably not. However, everyone knows who Batman is. Just like that, you should create a memorable character who will be bright and interesting enough to remember. Besides, you should work on the dialogs and monologs to give your character a temper and to make people better understand whom they are dealing with. As an example, you can take any comic book character outline and see what makes him/her/it special. However, make sure you do not duplicate anything. No one is interested in one more Superman.

A specific feature of this genre is that it requires drawing. It is not only about writing a good plot but also about the visual presentation of your heroes. If you do not know how to become a comic book writer, you should remember that it requires two components: writing and drawing skills. Sure, you can involve a good artist to help you but you will need to make him/her interested enough to start working with you. Still, do not get discouraged if your character seems a bit silly at first. Even professionals try different prototypes before they come up with a unique image of the main character.

In order to write a really fascinating story, you should know how to write a comic book script. It is not as simple as it may seem. Of course, you can find tons of information on how to write comics online but much of it can confuse you. If you choose to follow our outline, the next step will be to create a plot of your story. In other words, you will have to think about what to do with your characters. One interesting thing about writing a comic book is that you should not start writing if you do not know how the story is going to end! Just think about it. If you know the ending, it will be easier for you to bring your characters there. Moreover, it will be easier for you to create a reasonable chronology and write logical, informative, and interesting dialogues. So, try to start your story by creating its ending.

The other tip regarding comic book plot is that you have to think about a storyline, which will be understandable without much text in it. Do not forget that comics are mostly about watching, not reading.

To reach success in comic scriptwriting, the characters should also be placed in specific timeframes and locations. This method will require you to stay focused and will also make it easier for you to create a background of the story. You will not be drawing castles if the events of your story occur at present times in, let us say, New York. You can look for comic book scripts for artists online to understand the specifics of this genre better. Still, the thing to remember is that every step described above will lead you to the creation of an interesting plot with memorable characters.

The format of the comic book is one of its most essential parts. If you have created an interesting character and managed to come up with a fascinating timeline, it does not mean that you can sit and write your book right away. The truth is that every comic requires following a specific format. Marvel Studio is one of the most professional studios in relation to comic books creation. So, if you want to know how to write a comic book outline, you should definitely check on Marvel comic book sample scripts. They will give you an understanding not only of format but also of how to create truly outstanding heroes and stories.

The most important thing is not to turn your script into a novel with illustrations. If you see that writing is what makes most of your story, maybe you should try writing a novel instead of comics?

Comic book writing requires mastering its script format. Only if you know how to present your ideas properly, you will be able to come up with something worthy.

The difficulty of a comic book script format lies in the fact that the written statements should reveal not only what the hero says, but also how he/she does this. For instance, the small font can mean that the hero whispers something; capital letters can mean that the character screams. The phrases in the dialog panel should represent the real dialogue, while the statements outside the panel should demonstrate what this or that character thinks. Some background info can also be presented this way. Please, note that the name of the character should precede the dialogue to signify who says what. As you can see, the most difficult task is to make the sound visible.

Discussing the comic script format in general, it should be said that there are two types of books: saddle-stitched and square-bound comics. The former has always the same size and the same number of pages. The latter comes in all kinds of sizes and page counts. In case a self-contained story is published in square-bound form, it is called a graphic novel.

Of course, it is impossible to discuss all the peculiarities of the comic book writing format, but the basics described in this article will help you to make your first steps towards becoming a great writer.