Dr. Martin Luther King, Jr. was a great person who did lots of amazing things. His tactics for fighting for racial equality – through the use of non-violent methods inspired by Mahatma Gandhi – serve as inspiration today. Although he gave his famous “I Have a Dream” speech nearly 60 years ago, it still resonates to the present day. Indeed, millions of Americans celebrate and honor Dr. King as a result of his efforts. This is why many students write a Martin Luther King, Jr., essay. In fact, if you have taken any class related to civil rights, there is a good chance you have done this assignment. 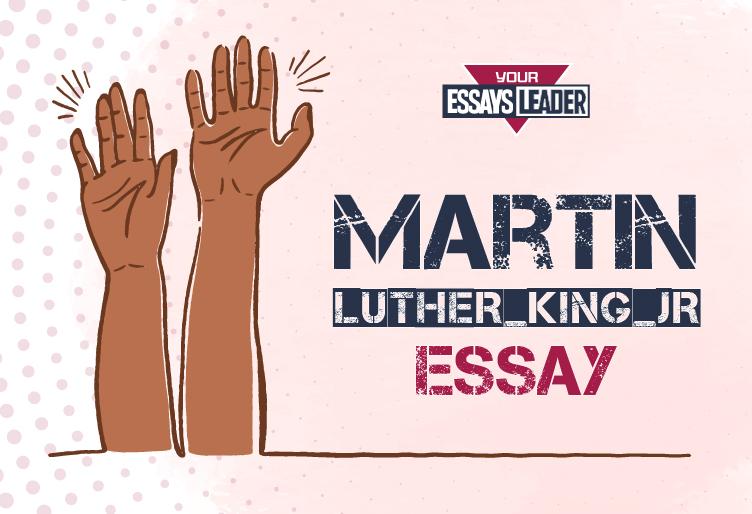 There are a couple of strategies that you could consider. For one thing, you could look at Martin Luther King Jr. essay samples to get started. Another suggestion would be to look at the list of Martin Luther King Jr. essay questions that we have created for you. Once you have chosen an appropriate topic, you should write an introduction that is intriguing and really hooks the reader. The introduction should end with a thesis statement that the rest of the paper will be built around.

You will need to do some research in order to find out more about Martin Luther King Jr’s life, particularly as it relates to the aspect of his life that you plan to discuss. In the body section of the paper, you should devote around three paragraphs to discussing main points that are tied back to the thesis. Finally, you should write a conclusion that summarizes the paper, includes some reflection, and leaves an impression as strong as Dr. King’s legacy! With some creative thinking and determination, you can write a Martin Luther King Jr. essay that really impresses your teacher and gets you a really high grade in the class!

Ideas to Get You Started

“A Letter From Birmingham Jail”:  A Strategy Well Executed

“A Letter from Birmingham Jail” was an eloquently written response letter by Martin Luther King Jr. to eight high ranking clergy men. He penned it as a response to accusations leveled against him by eight high ranking clergymen after he led protests against existing racial segregation in downtown Birmingham. Written as a reply to the clergymen, he successfully invokes the humanity of the “white moderate” or the middle class. Primarily concerned with the plight of the victims of illegal segregation practices still in practice at the south in the nineteen sixties, King determinedly seeks to gain their collective support. The target was this majority group that could help hasten the realization of the goals of the civil rights movement. Listing the numerous accusations leveled against him, King thoroughly takes issues with each of them fostered by their outlined main points. In a ‘the end justifies the means’ approach, king employs numerous strategies. Central among them was an eloquent narration, diverse methods of argument development and a predominantly logical approach in dealing with a very emotionally charged issue. In his powerful prose he advantageously and effectively employs flaws in neglecting ethical integrity. All in all, the strategies successfully drive his message home, marking a turning point for the Civil Rights Movement and a great milestone in the enduring inspiration in the struggle for racial equality.

In a non-aggressive style, King strategically structures his prose eloquently. This lays the foundation on which the essay is built, protracting it as ethical and non-blaming. This is because he was fully aware of the nature of the target audience. Trading accusations in a problem of such a magnitude would only add tension and thus he avoids pointing an accusatory finger in any direction at a time when the main goal would be to secure the unity of the sparring factions. Thus he seeks to keep the valid arguments alive rather than kill them by initially taking sides, an approach that can be considered gentlemanly and diplomatic. Paragraph eight exemplifies this when King writes about the breaking of promises made to the Negro community by local white merchants. “As in so many past experiences, our hopes had been blasted, and the shadow of deep disappointment settled upon us”. As dictated by the nature, he recognizes the faults but declines to point an accusation finger. He chooses to blame no-one in these circumstances. With the eloquent remark “that will help men rise from the dark depths of prejudice and racism to the majestic heights of understanding and brotherhood” King clearly roots for unity whilst offering a dignified way of life, unbelievably sweet and cheaply up for grabs.

Through narration, comparison and contrast, and cause and effect, King successfully develops his essay. At the very beginning, he remarkably commences with the line; While confined here in Birmingham City Jail …’ which immediately forms the negative image of a people who are poor yet still suffering in the hands of a racial society. Throughout the whole essay, narration is employed as a tool to keep the reader involved at an emotional level of the plight of the Negro.  Another tool effectively applied is comparison and contrast. Through biblical allusions, he compares his predicament and those of the Negro race to Jesus. An ethically renowned, morally upright and historically recognized teacher, Jesus advises “Love your enemies, bless them that curse you, do good to them that hurt you, and pray for them which despiteful use you, and persecute you.” He also borrows from Abraham Lincoln, “This nation cannot survive half slave and half free” and Thomas Jefferson, “We hold these truths to be self-evident, that all men our created equal….”. Though a dangerous strategy, he can claim to be like them as shown in his passion for the beliefs he upheld just as they were tied to their passionate beliefs and philosophies.

The basic foundation of his argument is cause and effect. Through reason he appeals to the audience and tries to successfully portray the most logical action, thus unbelievingly justifies the course of action adopted.  A great example is when he roots for civil unrest and its necessity by clearly implying that it was caused by the unjust laws. The fifth paragraph clearly points to his direct approach.

‘You deplore the demonstrations taking place in Birmingham. But your statement I’m sorry to say, fail to express a similar concern for the conditions that brought about the demonstrations. I am sure none of you would want to rest content with the kind of superficial kind of social analysis that deals merely with the effects and does not grapple with underlying causes.’ This appealing, logical and non-threatening approach makes this letter so effective, strengthened by pathos that further sparkle King’s prose. He remarks “When you have seen vicious mobs lynch your mothers and fathers at will and drown your sisters and brothers at whim; when you have seen hate-filled policemen curse, kick, and even kill your black brothers and sisters; when you see the vast majority of your twenty million Negro brothers smothering in an airtight cage of poverty in the midst of an affluent society; when you suddenly find your tongue twisted and your speech stammering as you seek to explain to your six-year-old daughter why she cant go to the public amusement park she has just seen advertised on television, and see tears welling up in her eyes when she is told that Funtown is closed to coloured children. The strength of the prose and the emotive connection seeks to draw a humane and conscious approach to the issue, projecting it not as a passing problem but as a dynamic matter that cuts across different generations.

Though he presents himself as an ethically sound and upright figure, his main flaw is plagiarism. Arguing on the platform of ethics he is greatly supported by his humble tone, non-blaming manner and extensive knowledge of racism, not to mention his own religious background and setting. Unfortunate though is the realization that most of the diction used in the essays and even in his famous works were borrowed from writers who went unrecognized and unmentioned.  All in all, he managed to deliver the message in a clear and admirable way which ultimately was more acceptable than the sins King was attempting to end with his prose. In a world of ‘the end justifies the means,’ this is totally acceptable though he seems to harbor totally different thoughts. He says in the letter; “I have constantly preached…that the means we use must be as pure as the ends we seek. I have tried to make it clear that it is wrong to use immoral means to attain moral ends.”

King effectively fronts his arguments. The adoption of the strategy determines the level of success expected. He concludes by questioning the justice in a law that deprives a citizen the privilege of assembly and protest as well as questioning the requisite of a permit when you are deprived your basic rights. The logical approach maintained throughout offers no option but a well gauged agreement and acceptance in the face of reality.  Through various rhetorical strategies, King succeeds in his ultimate purpose; convincing the white moderate audience to support the Civil Rights Movement.